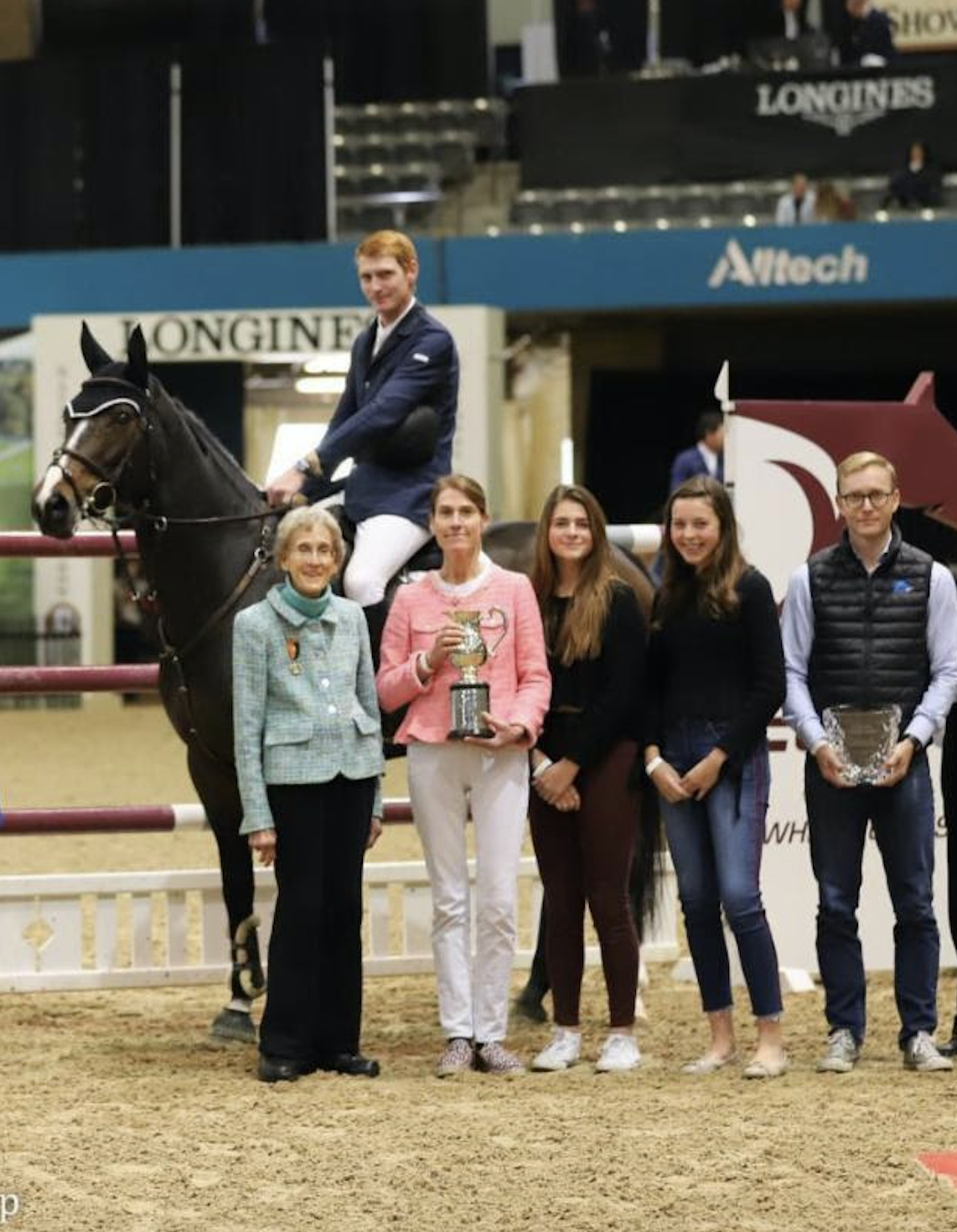 Lexington, Ky. – Nov. 5, 2019 – The highlight event of Friday afternoon, Nov. 1, at the 2019 National Horse Show, the $36,000 EquiJet Accumulator CSI4* class brought 24 contenders to the Alltech Arena for the unique class. Garnering the most points the quickest out of the competitive field, Daniel Coyle of Ireland and CHS Krooze logged their second victory of the week, proudly earning the blue ribbon and the Whitney Stone Memorial Trophy. The class was one way in which EquiJet supported the National Horse Show this year, in addition to serving as the Official Equine Air Transportation Provider and a prominent supporter of the popular equitation weekend by providing all of the exhibitors with custom backpacks.

“We were so thrilled to be able to sponsor the Accumulator Class, one of the most interesting classes of the week, at the National Horse Show this year! Watching the class was a real treat, and we had so much fun seeing all of the riders tackle our EquiJet fence as the final ‘Joker’ fence,” commented Bastian Schroeder, Founder and President of EquiJet. “Daniel was a great winner of the class, and we are excited to see what else he accomplishes going forward with CHS Krooze. We hope to see him competing at the National Horse Show with us again in 2020.”

One of the most fun and creative classes of the event, the $36,000 EquiJet Accumulator CSI4* featured ten obstacles of increasing difficulty, where points accrued for each fence cleared. Obstacle one jumped without fault earned one point, while obstacle two jumped without fault earned two points and so on. At the final fence, exhibitors could choose to jump the number ten obstacle and earn the associated ten points, or they could take the harder ‘Joker’ fence, worth 20 points. Successfully clearing the ‘Joker’ jump earned 20 points, but knocking it down would result in deducting 20 points from the total tally.

As the third combination to tackle the track, Rowan Willis (AUS) and his own Wellington Grandorie became the first successful pathfinders, stopping the timers in 49.55 seconds with the first perfect 65-point score. Just two trips later, Sloane Coles (USA) and Calisto 26, also owned by Willis, amazingly tripped the timers in the exact same time, finishing on 65 points in 49.55 seconds to tie the early leaders. Halfway through the pack, the lead changed hands for the first time thanks to Molly Ashe Cawley (USA) and Balous Day Date, but they were soon beat to Lillie Keenan (USA) and Agana Van Het Gerendal Z, who upped the speed further still to a brisk 65-point round in 48.40 seconds. Soon thereafter, Coyle and his own CHS Krooze took to the ring determined to add another first prize to their growing list, crossing the finish line with all the rails still in their cups in a blazing 46.16 seconds to capture victory.

“The accumulator class is hard because every jump is a little bigger and then they sneak the ‘Joker’ in at the end, plus it is a speed class so it takes a clever horse to realize that the jump goes up. She is very clever, though, and it just all kind of went my way. She is always going to be fast, so it is more just getting her used to this height, but I knew she could handle it,” reflected Coyle of the class and CHS Krooze.

He continued, stating, “This is my first time at the National Horse Show and the show has been great. It is a good atmosphere and a real indoor-type atmosphere that you don’t get in too many places over here [in the United States]. I really like the show and I will definitely come back!”

Coyle and the 9-year-old mare CHS Krooze are rookies to the National Horse Show, but their first visit has proved fruitful as the partnership has earned first place in Thursday’s $36,000 International Open Jumper Speed CSI4* as well as Friday’s $36,000 EquiJet Accumulator CSI4*. On Wednesday, the combination sped to second position in the $36,000 Free x Rein International Jumper Welcome Speed CSI4* costume class, as well.