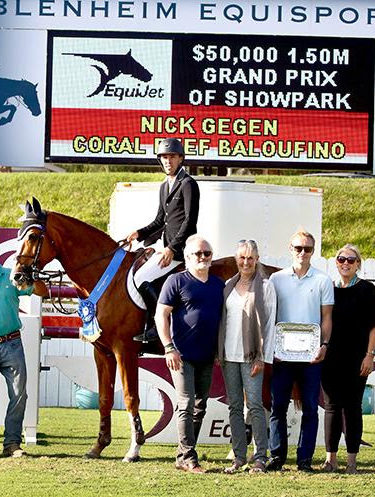 Del Mar, Calif. – Aug. 27, 2018 – Leading international transportation company EquiJet was proud to be a part of the success at the Del Mar Horse Park this past weekend as Saturday afternoon hosted the $50,000 Grand Prix of Showpark, presented by EquiJet. In addition to presenting the titular award to Nick Gegen, the grand prix champion, Bastian Schroeder of EquiJet also congratulated Carly Anthony on earning the EquiJet 1.50m Grand Prix Leading Rider Circuit Award.

Besting a field of competitive contenders, Nick Gegen and Coral Reef Ranch, LLC’s Baloufino produced a standout effort over the 13-obstacle track to earn a slot in the jump-off. Of the six pairs that returned over the short course, Gegen and Baloufino returned to the jump-off first and held their lead by executing a smooth second round in 42.13 seconds, ultimately laying down the only double clear of the afternoon and claiming the $50,000 Grand Prix of Showpark.

“I tried to carry enough pace at the beginning to make sure I would be fast enough, and then in the last part I was a bit conservative,” remarked Gegen on his winning strategy. “I wouldn’t have changed anything, even if I could.”

EquiJet and the Blenheim EquiSports Horse Show Series became partners in early 2018. In addition to sponsorship of the $50,000 Grand Prix of Showpark, the company is also acting as a sponsor of the 1.30m jumper division and the 1.50m Grand Prix Series Leading Jumper Rider Circuit Award.

During the grand prix awards ceremony, the EquiJet 1.50m Grand Prix Leading Rider Circuit Award was also announced. Carly Anthony emerged victorious after accumulating points with wins in the $60,000 Grand Prix of California and the $30,000 Blenheim June 2 Grand Prix, as well as second place in the $50,000 Blenheim Spring IV Grand Prix. Anthony was paired with Neil Jones Equestrian’s Chacco for each success. She will receive a leading rider sash as well as a gift certificate for a one-way domestic flight for a horse of her choosing. Natasha Traurig accepted the award on behalf of Anthony and Neil Jones Equestrian as Anthony was competing in the Longines FEI Jumping World Cup™ Vancouver.

As a sponsor, EquiJet is proud to be able to support the many horses and riders for which it provides transportation. As one of the country’s premier equine transportation companies, EquiJet places importance on making each horse’s travel – whether to a local show, across the country, or across the world – as stress-free and comfortable as possible. Services offered by EquiJet include both domestic and international air and ground travel, in addition to orchestrating airport handling, quarantine, documentation and accompanying equipment. EquiJet offers unparalleled customer service by horse people, for horse people.